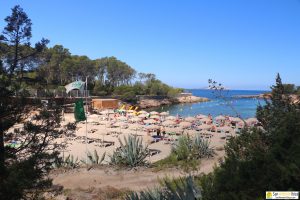 When in Ibiza, come visit the island’s amazing and huge aquarium attraction in San Antonio, the Aquarium Cap Blanc. Marvel at some of the most beautiful and colourful species in this part of the globe, particularly those that thrive in the Mediterranean Sea, then you can find them swimming in all their glory at the Aquarium Cap Blanc. The Aquarium Cap Blanc is a great entertainment and fun day out activity centre located about 2 km. from San Antonio in Ibiza, close to Cala Gracio. You may see wide range of Pitiusan marine fauna, coloured fish, octopus, rays and many other marine creatures at the aquarium.

Of course Ibiza is very popular as a summer vacation destination. People of all ages come to Ibiza, including the town of San Antonio, to enjoy many of the sights. Ibiza is quite famous for its white-sand beaches sprawling with activity and nightclubs that party all day and all night.

But San Antonio, Ibiza is also a nice destination for families. There are a lot of things to do, lots of places to see. One excellent place to visit in San Antonio is an underground aquarium in a cove where you can watch a lot of beautiful fishes – the Aquarium Cap Blanc.

Growing From A Hatchery To A Tourist Destination 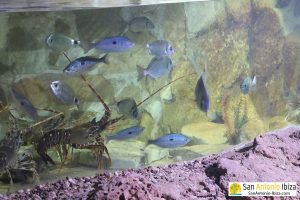 Aquarium Cap Blanc is more popularly known as the “Sa Cova de ses Ilagostes”. If you take time to find out of the history of this aquarium, you will learn that it used to be a hatchery for lobsters. As a port city, Ibiza was heavily involved in the trade of seafood and the growing demands of industry and commerce required it to ensure that quality control measures were in place for the island’s produce. Chief among these were lobsters, which were already a valued delicacy during that time.

Lobsters from Ibiza were being shipped to other cities in their markets like Barcelona. Aquarium Cap Blanc served as a nursery and temporary warehouse not just for lobsters but also for fish which the folk of Ibiza have yet to sell due to obstacles like bad weather or wrecked ships. Aquarium Cap Blanc was a sanctuary, allowing fish and other marine invertebrates to stay alive and fresh before being sold.

It was in the year 1989 when the people in charge of the “Sa Cova de ses Ilagostes” decided to improve the conditions of this lobster sanctuary. Five innings were constructed, in order to directly allow and better improve the flow of sea water into the facility. These allowed better circulation and oxygenation of the water, which resulted in a better environment for its marine inhabitants. Eventually, the lobster sanctuary was turned into an aquarium and opened to the public, so that visitors could observe the natural beauty of Mediterranean marine life.

Marvel At The Beauty Under The Sea

Today, Aquarium Cap Blanc is home to different kinds of fish, sea invertebrates like starfish, corals, and various arthropods that live deep down. The main composition of the aquarium remains to be the five large innings/ open tanks built back in 1989. These tanks are constructed in an underwater cave, accessible for tourists via a special entrance.

A wooden gangway is right above the water tanks, which allows you to view the sea creatures living there from above. The sea water flowing into the tanks ensure that these creatures feel as if they were in their natural habitat.

In addition to the five main water tanks, there are also traditional fish aquarium tanks built in the cave walls and holes of the ceiling. These aquariums also serve as a source of natural light, thereby illuminating the entire underwater cave while also providing the nice effect to your marine experience.

Some of the fish you can observe in Aquarium Cap Blanc are some of the most bright and colourful species. There are the groupers, snappers, sea bream and the Fadrins. These fish are the same ones which snorkel divers marvel at whenever they are in Ibiza. 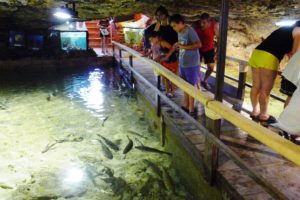 There are also some weird-looking and quite exotic fish like the Scorpion Fish which is aptly named because not only is it ugly but is also poisonous. The Flying Gunnard and some species of stingray can be seen gliding effortlessly at the bottom of the tank.

In the tanks built on the cave walls, there are still lobsters being kept which is somewhat keeping up with the original purpose of the aquarium. Aside from the lobsters, you can also observe sea snails, saltwater catfish, and octopus.

Aquarium Cap Blanc still acts as a marine sanctuary, only this time it is not to keep fish or lobsters safe for reselling and export. Rather, the facility is actively involved in the preservation and protection of marine life in Ibiza. 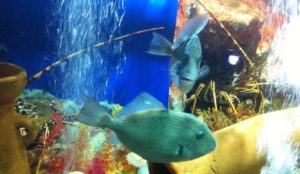 Registered as a Recovery Centre of Marine Species or CREM, the aquarium is like a hospital for sea creatures who fall victim to manmade activities like garbage disposal. Sea turtles are some of the beneficiaries, being given treatment and nursed back before being allowed to return to the wild.