Behind Ibiza’s famous explosive nightlife, clubbing scene and beautiful beaches, lies beautiful towns and sites that are full of rich histories and deep culture. One of such places is Dalt Vila, which is also known as the Ibiza Old Town. If you are planning to fly in soon, you should make time and visit Ibiza City, and be enamored by its historical landmarks and artifacts. 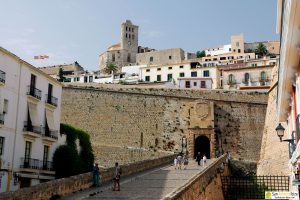 In Ibiza City is the Old Town, which is also known as the Eivissa Dalt Vila, and is a UNESCO world Heritage site in Ibiza, located on the southern coast of the island, about 17 km. from San Antonio Ibiza. There is more than one entrance to Dalt Vila, and each provides a unique and inviting impression of what the place has in store for you. The main entrance takes up a slope, which then connect to a drawbridge that leads to the Portal de Ses Taules gateway.

This entrance dates back between 1584 and 1585, but it was not until the 20th century that the present drawbridge was made permanent. You cannot miss this passage as it is bordered by mighty statues that can easily be seen. Through it, you will come into a cobbled stone courtyard, and out into the main square, which is named the Plaza de Vila.

Once you are in the main square, you will be welcomed with quaint restaurants, nifty arts and crafts shops, and alluring galleries, all of which are walled-in by pretty stone frames. Just being inside will make you feel like you are on a time trip to the past.

Another entry way you can take is the Portal Nou gate, which connects Reina Sofia Park to Plaza del Sol. Although it has a more gradual climb, it still measure as long as 50 meters and peaks at 3 meters high. Until now, the 16th century wooden doors that it was built with is still present. But, the climb itself is already an experience, particularly in terms of interior details, so take your time heading up.

Some of the biggest and famous sites you can find in Ibiza Old Town are the seven bastions. These bastions make up Dalt Vila’s entire defensive walls. One of such strongholds is the Baluard de Sant Bernat, which dates back all the way to the 16th century.

Some of its relics, such as military uniforms, armors, and artillery, are still displayed and can be viewed to this day. Back when pirates and other foreign invaders ran rampant, the Baluard de Sant Bernat served as a sanctuary for the citizens of Ibiza. Aside from the relics displayed, you can also, in one section of the place, try and wear a suit of armor and wield all kinds of historical weapons.

Another bastion found in the area is the Baluard de San Jaume. You can see inactive bombs, firearms, and blades, which are from the sixteenth through eighteenth centuries. You can visit the place from 10am to 2pm, and also from 6pm-9pm.

One of the most intricate defensive buildings among the 7 bastions in Dalt Vila, is the Baluard de Sant Pere. From tunnels that lead to bunkers, to a plethora of antique weaponries, this bastion is quite amusing to navigate. Plus, there is also an audiovisual presentation that you can participate in, which can give you a brief yet enlightening overview of the structure before you.

If monuments and sculptures are more your thing, then visiting the Isidor Macabich Statue will suite your fancy. This monument was built in honor of Isidor Macabich, who was both a historian and a priest. His works and documentation of Ibiza’s history, which spanned over four volumes, contributed to the preservation of the island’s past and heritage. The statue can be seen as a man sitting on a bench with books at his side. Also the Cathedral of Santa Maria de las Nieves (Our Lady of the Snows) on top of Ibiza Old Town is worth visiting. 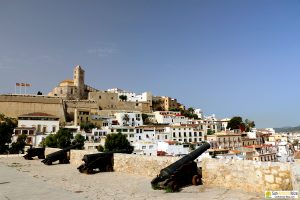 At the north side of this old town, another bastion can be found, which is the Baluard de Sant Joan. Atop this fortress, you will get to visit beautiful gardens, which provides a nice contrast to the structure’s stone interior. This bastion also provides a picturesque view of the La Marina district all the way to the town’s main harbor.

There is also the Baluard de Santa Llucia, which is considered the largest bastion in this walled city. It was thanks to engineer Giacomo Palearo’s vision that this citadel’s unique designed came into fruition. Unlike the other bastion in Dalt Vila, this one has more asymmetrical framework.

Apart from the gun displays that are located at the top level of this construction, you can also see a Polvorin on the area. Polvorin is actually a structure that served as a room for ammunition and armaments. But, that was only back then when Ibiza was under constant threats from trespassers. Now, it serves more as an exhibition hall.

Hopefully, all this information will be enough to give you a glimpse of what awaits you in Ibiza Old Town. 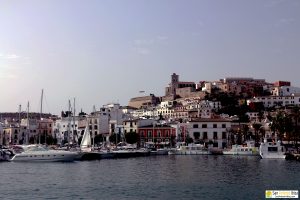 There are also very interesting guide tours you can book that will guide you via all the popular tourist locations but will also show you the more hidden (but not less fantastic) spots!

Ibiza Old Town has very attractive walls and networks of streets. The capital town offers variety of services for the visitors and residents such as yachting marinas, business zones and hospitals.

The neighbouring La Marina district, Paseo de Vara de Rey and la Plaza de Vila are the main sights of the town as well as with the nice museums such as the Archeological Museum & Contemporary Art Museum and historical sites such as the necropolis of Puig des Molins.

The historical Old Quarter of Ibiza and main sights are centred in the Upper Town (Dalt Vila), declared a World Heritage City by the UNESCO, where one can visit the Archaeological Museum with its extensive collection of Punic and Phoenician exhibits.